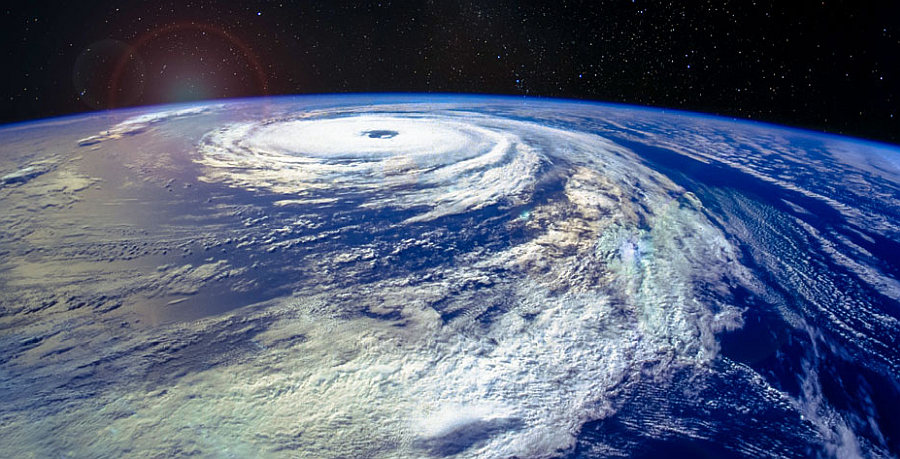 The water on the Earth’s surface that now fills our seas and oceans got there as part of a process that started with the origin of the Earth itself. The material from which the Earth and the other planets were later to be formed probably began as a cloud of gases spinning around the Sun. These gases gradually condensed, making solid particles. Many of them collided and built up larger and larger concentrations of matter.

The part that was eventually to become the Earth seems to have cooled and begun solidifying about 4.6 billion years ago and as the spinning movement shaped matter into a ball, it contracted even further. Under these pressures, matter at the center of the newly formed Earth began to heat up again and became molten. When this happened, water that had contained inside the Earth was released to the surface as vapor and added to the primitive atmosphere. When it cooled and condensed, it fell to the surface as rain and eventually formed the first oceans.

We do not know how much of the water in the oceans came from this source, but estimates range from a third to almost all of it. Neither can we tell when this happened, but some indication comes from rocks. The oldest rock discovered so far on the Earth’s surface is from Greenland and is 3.8 billion years old. It is a kind of rock formed from pebbles laid down underwater and later compressed. This shows that water must already have condensed and fallen to Earth during the 800 million years that had passed since the Earth formed.

The rest of the water in the oceans also came from the interior of the Earth, but it was forced to the surface by volcanic eruptions and hot springs. There are many volcanoes and hot springs on land and even more in parts of the ocean, and they are still spewing out water. Only a small proportion of this water is new or juvenile water coming from deep inside the Earth for the first time. Most of it is groundwater or seawater that has seeped down into the Earth, heated up through contact with hot rocks and then returned to the surface in a volcanic eruption or a hot spring.

Was the water that came from the Earth’s interior to fill the oceans the same salty seawater we know today? As far as we can tell, the oceans have never contained freshwater. Salt, or salinity, comes from gases and other substances dissolved in the water. When water first rose to the surface of the Earth as steam, it contained gases, some of which dissolved in the original oceans. Since then, volcanoes have continued to produce other gases along with water and added them to the oceans. Some of the other substances in seawater reached and still reach the ocean by a different process. They come from rocks on land which slowly breaks down to produce tiny fragments that flow in rivers into the oceans. The seawater in our oceans reached a composition very similar to what it is today about one billion years ago.

Just as substances added to seawater, so also are they removed. If they were not, the concentration would go on building up. Water is still being added to the oceans by volcanoes, rain, and rivers, and is being lost again by evaporation. The salinity of seawater remains at the same level because some of the solids sink to the bottom or thrown into the air in sea spray. Salt particles attract water in the atmosphere, and droplets grow on them, some of which are blown away over the land as rain. By these means, water and solids recycled through the atmosphere, rivers, sediments, seawater, rock, and the Earth’s interior to maintain the overall composition of the oceans.

The Pacific Ocean and El Nino

The Pacific Ocean is the worlds largest and deepest ocean. It stretches from Australia to Easter Island and from Hawaii to New Zealand. Every two to ten years, the weather throughout the southern Pacific Ocean shifts wildly. The normally wet Far East becomes dry, and the arid western coast of South America receives heavy rains. This phenomenon is called El Nino.

Scientists cannot fully explain the subtle interactions between the ocean and the atmosphere that produces El Nino, but they do know that the process involves a weakening of the southeasterly trade winds that usually dominate the area’s weather and a corresponding .redistribution of warm water throughout the Pacific Ocean.

The other extreme of this phenomenon, La Nina, brings torrential rams to the Far East and causes severe droughts in South America.