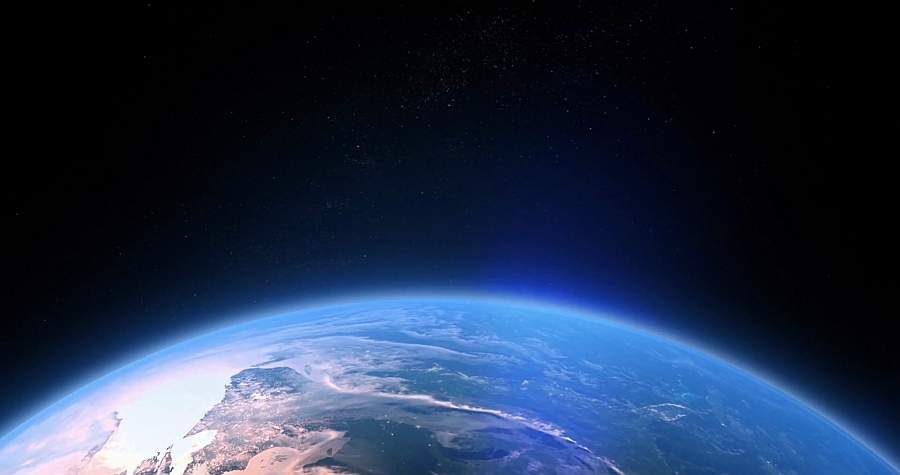 The atmosphere, which surrounds and sustains life, is the stage set within which the drama of weather played. Extending from the Earth’s surface to perhaps 965 kilometers or 600 miles or more into space, the atmosphere divides into several layers, each comprised of gases in varying quantities and densities, namely the troposphere, the stratosphere, the mesosphere, and the thermosphere.

There is very little water vapor in the next atmospheric layer, the stratosphere. The stratosphere contains almost no clouds and oxygen and most of the other life-sustaining gases thin out. As the altitude changes, so too do the temperature. This happens because the Earth and the water vapor in the troposphere act as radiators, absorbing and giving off the Sun’s heat, but beyond the troposphere, neither the Earth’s heat nor water vapor is a factor in determining atmospheric temperature.

In the stratosphere, the temperature becomes warmer with increased altitude because of the dominance of solar radiation. Then in the next layer, the mesosphere, the temperature turns cold again, in part because of the reaction of a gas called ozone that blocks out the Sun’s ultraviolet rays. The temperature continues to drop until it reaches 85°C or more below zero. Then, at perhaps 80 kilometers or 50 miles over the Earth, where the thermosphere begins, the gases, under the direct influence of the Sun, become so thinly concentrated that they all but disappear.

These upper layers affect events in the troposphere by shielding the Earth from the searing rays of the Sun. Also, these upper layers together contribute about 25 percent of the atmospheric weight that presses down upon the Earth’s surface. The troposphere contributes the other 75 percent of the atmosphere’s weight through the presence of its relatively dense gases, including water vapor.

Vapour enters the atmosphere by evaporation from oceans, seas, and lakes and, to a lesser extent, from wet ground and vegetation. Heat is needed for evaporation to occur and this heat is taken from the surrounding atmosphere and the surface of the Earth, which therefore becomes cooler. This heat is not lost but stored in the vapor as hidden or latent heat. Winds carry the vapor to higher levels of the atmosphere and different parts of the world. As a result, water vapor may found throughout the troposphere and overall regions, oceans, and continents. Eventually, water vapor condenses into liquid water or solid ice and falls to the ground as precipitation – rain, snow or hail.

In condensing, it also releases its latent heat to the atmosphere. Thus, if water evaporates into the air from a tropical ocean and winds then carry it to a temperate continent, where it condenses and falls as rain, this provides a very effective means of carrying not only water but also heat from places that have plenty to places that are short of both.

In the air around us, the temperature, pressure, and moisture content are affected by the fourth critical ingredient that makes up our weather – the wind. As we know, wind is the name for a moving mass of air. Nearly everyone is familiar with winds that blow from north, south, east or west – that is across the Earth’s surface or horizontally. But winds also blow vertically – as birdwatchers know from seeing gulls or crows sail upwards on rising currents of warm air or from watching a hawk sink down rapidly on a descending cold current.

Most vertical air currents are much gentler than horizontal winds, but they are vitally important because they can generate many different types of weather. When air rises, it expands because the pressure on it becomes less. As it rises, the air cools. Because it cools, its moisture content increases. Eventually the rising air may reach a level at which it becomes saturated with moisture. If it rises still further, water vapor starts condensing to form clouds. Nearly all clouds and rain originate in up-currents of air.

One reason why air starts to rise is because of temperature differences from place to place. Such differences are very marked on sunny days over land, when the air above some surfaces, such as asphalt or bare soil, becomes warmer than that over adjacent surfaces, such as trees or lakes. The warmer masses of air, which can be called bubbles, then start to rise. The air between the rising bubbles sinks to compensate. This type of air • movement is called convection.

Once a bubble of air has started to rise, it will continue to do so as long as it remains warmer than its surroundings. As it rises, it cools, initially at a rate of 15°C per 90 meters, but its surroundings also cool with height. Eventually the bubble will reach its condensation level, and clouds will start to form. The condensation in such clouds releases latent heat, making the rising air even warmer. This increases the difference in temperature between the rising air and the surrounding air. The atmosphere is then said to be unstable. As long as the atmosphere remains unstable, the bubble of air will grow bigger and rise further, producing a tall cloud. This cloud may become so saturated with moisture that rain or snow begins to fall from it.

On the other hand, if the rate of decrease of the temperature in the air surrounding the bubble is quite low or if the temperature rises with height, as it sometimes does, then the rising air bubble will soon become colder than its surroundings. The bubble will then stop rising. In this situation the atmosphere is said to be stable. Bubbles may never reach their condensation level, in which case no clouds will form, or the bubble will produce only small, shallow clouds. When clouds do form, condensation may stop before the air becomes so saturated that precipitation begins. This is typically the case in stable air.